My quest to start a whoopie pie stand of my very own in a Chicago farmers market.

Well ladies and gentlemen, I think I can claim my first macsperiment a success.  It was definitely nervewracking, but I read up quite a bit beforehand and tried to avoid some common pitfalls before I even started.  Some helpful tips I used can be found here, here, here, here, and I used this recipe.

That recipe is the first result you get when you google “how to make macarons,” but I chose it because 1) it didn’t require Italian meringue (a technique that involves slowly pouring a heated sugar syrup into egg whites as they’re beaten), 2) the recipe didn’t call for dehydrated egg whites or meringue like some do, 3) I thought she gave some great tips, and 4) her recipe made perfect sense to me.  So there you have it.
Okay.  Now.  Although the ingredients list for macarons is pretty small, and there aren’t necessarily that many steps, there are still a seemingly infinite number of ways to make macarons.  For (bizarre) example: the age of the egg whites.  There is a huge variation among recipes in how long you should “age” your egg whites.  Some say you should separate your eggs and store the whites uncovered on your countertop for anywhere from 24 hours to 5 days (yes, 5 days, and no, they won’t go bad thanks to Ovotransferrin, Lysozyme, and Ovomucin), some say you can age them in the fridge for the same amount of time covered or uncovered or covered with saran wrap with holes in it.  Until I was re-looking up the above links, I hadn’t heard of anywhere condoning “fresh” egg whites, but I just stumbled upon this site, which goes against every other recipe I read, some of which actually said fresh egg whites would never make good macarons.
So anyway, here are the parameters I used this time:
Ingredients:
50g almond meal/flour (I didn’t grind my own because I was scared by some accounts of almonds just turning into almond butter in the food processor, so I used Bob’s Red Mill brand)
100g powdered sugar
52g egg whites
22.5g granulated sugar
a scant pinch of cream of tartar
Age of egg whites: 3 days, in fridge covered with holey saran wrap
Sifted: both the almond flour and powdered sugar
Egg whites beaten to: glossy, stiff peaks, but nothing past that (I saw one recipe that called for beating an additional 3 minutes after achieving stiff peaks)
Baked on: textured side of a silpat
Piped with: small star tip that came with a Babycakes mini cupcake maker I got for Christmas from my fabulous almost sister-in-law
Baked at: 275 degerees F (recipe called for 300, but I think my oven gets hotter than I tell it to)
Grease on silpat: none

fold dry ingredients into egg whites until the mixture "flows like magma" and then pipe... 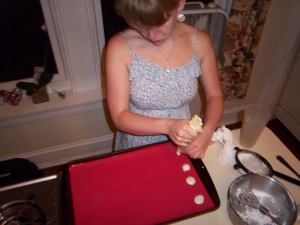 look at those mad pipin’ skills. never had one lesson! 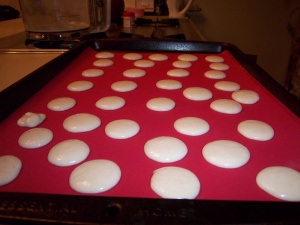 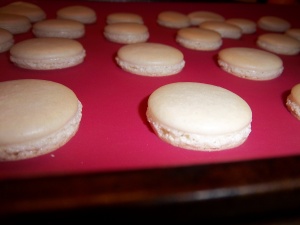 Result: they looked excellent – perfect little feet (which is this part).  I didn’t use any coloring and some came out slightly browned, which I don’t think made any difference in taste or texture.  Although they looked beautiful on the silpat, major problems arose when I tried prying them off of the silpat.  Yes, prying.  😦  Soft bits were still stuck to the mat (were they not fully baked? they didn’t wobble, which is supposed to be the test), which then stuck to the spatula I used to try and delicately convince them to give up their pleasant little silpat home.  On top of this, they seemed much more fragile than other macarons I’ve tried, and I thought those had been fragile!  I was able to pipe some store-bought jelly on them to sandwich them together, but they were just way too fragile.  If you looked at them funny they collapsed like an overemotional mother-of-the-bride.  Taste was good, maybe a little on the sweet side, which didn’t jive with the sweet jelly very well.  Texture was also good, and the shells retained a good bit of crisp even thought they went in and out of the fridge for the next 2 days.

So – on appearance, pretty much full success pre-silpat-removal.  Post-silpat-removal they still weren’t too bad although the feet stuck out a little, which is undesirable.  On texture – good mouthfeel and crisp outer shell but way too fragile.  On taste – not bad, could be less sweet.

two macarons...just hangin' out together

Next time I think I’ll mess around with what I bake them on and maybe the temp I bake them at and how long I bake them.  Stay tuned!